FOXBOROUGH, Mass. -- With New England Patriots quarterback Tom Brady not taking part in voluntary workouts this year, he has lost time to build a foundation with receivers with whom he doesn’t have a deep background.

That’s part of what made receiver Julian Edelman’s return from a torn ACL especially important. Brady and Edelman have a special connection -- and have spent considerable time working together this offseason -- that took time to develop.

With the possibility that Edelman will be serving a four-game suspension to open the regular season, pending appeal, it now magnifies the need for Brady to develop connections with others. Tight end Rob Gronkowski and running back James White are the closest to having an Edelman-like connection with Brady.

In past years, the Patriots could have relied on Danny Amendola (now with Miami). Now it’s going to have to be a cram session with many of them. Colleague Dan Graziano wrote about some outside options for the team to consider, and here’s how the internal roster looks:

Chris Hogan: The six-year veteran vaults to the top spot on the depth chart in terms of experience with Brady. They’ve played in some big games together, and there’s a notable level of trust between them.

Phillip Dorsett: A 2015 first-round draft choice of the Colts, Dorsett was acquired in a trade this past September for quarterback Jacoby Brissett, which meant he was learning on the fly last year. Having a full offseason in the team’s program should help. He’s smart and fast, and his chances of making the team increase.

Jordan Matthews: Usually one of the first players on the field at practice each day, the former Philadelphia Eagle (2014-2016) and Buffalo Bill (2017) chose New England over other suitors in part for the chance to play with Brady. The two almost connected on a deep ball down the right sideline Thursday, but it grazed off Matthews’ fingertips. One thing is for sure: If Matthews doesn’t emerge, it won’t be for lack of effort. He can line up at each spot on the field, but has had his best success on the inside.

Kenny Britt: The Patriots haven’t had too many receivers the size of Britt (6-foot-3, 223 pounds) who move as well as he does, and that was evidenced when he hauled in a deep ball from Brady on Tuesday that had Brady emphatically yelling in Britt’s direction. Britt, who, like Dorsett, is in his first offseason with the team, later pulled up (hamstring) and has been sidelined since.

Cordarrelle Patterson: On Wednesday, Brady seemed to make an extra effort to work with Patterson, who is a lock to make the roster as the primary kickoff returner, and anything he adds on offense will be a bonus. Nicknamed “CP,” he appeared to be fighting the ball at times in practice, but similar to Britt, he moves well for a player his size (6-2, 220). 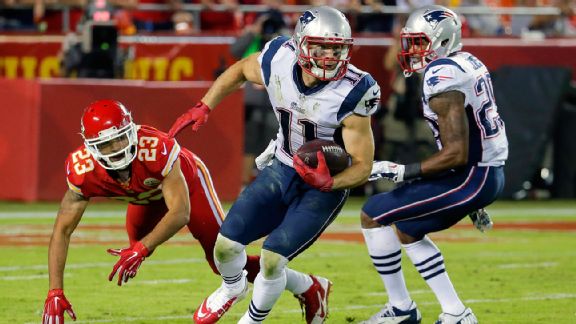 Julian Edelman is facing a four-game ban for violating the NFL's policy on performance-enhancing substances.

• Who could the Patriots target? »
• How it affects NE's other receivers »
• Video: Schefter provides the details »

Malcolm Mitchell: The 2016 fourth-round choice out of Georgia, who developed trust with Brady that was highlighted by his second-half performance in Super Bowl LI, missed all of last season with a knee injury and hasn’t been spotted on the field through the last two weeks of practices. It all comes down to health with him.

Riley McCarron: Nicknamed the “Iowa Flash” by Texans coach Bill O’Brien when he was with Houston in 2017 training camp, McCarron spent most of the regular season on the Patriots' practice squad. The 5-9, 185-pound McCarron has been a primary punt returner in practice and has the look of a traditional slot receiver in the Patriots’ system. He could be a sleeper.

Cody Hollister: Similar to McCarron, the former Arkansas special-teams standout spent last year on the team’s practice squad. The 6-4, 209-pound Hollister caught the ball well last preseason but seems to be fighting through some type of leg injury this spring.

Braxton Berrios: The 2018 sixth-round pick out of Miami has been wearing No. 55 in practice -- Patriots coach Bill Belichick has yet to issue permanent jersey numbers to rookies -- and has been slowed by an undisclosed injury. Because of that, most of his work has come as a punt returner, with limited running involved. The 5-9, 183-pound Berrios projects as a pure slot receiver.

Matthew Slater: The longtime special-teams captain is used sparingly at the position.