PHILADELPHIA -- Just hours after Malcolm Jenkins held up signs to gathered media in the Philadelphia Eagles locker room Wednesday, he addressed a group of about 100 public defenders at a reception.

He explained how the police shootings of Alton Sterling and Philando Castile motivated him into action. How Anquan Boldin’s cousin also was killed by a police officer after his car broke down on the side of the road, leading to Boldin’s involvement and the eventual forming of the Players Coalition, which convinced the league to contribute $89 million over seven years to projects dealing with criminal justice reform, law enforcement/community relations and education.

Jenkins spoke of how members of that coalition recently helped push through a piece of legislation in Boston that raised the age children are allowed to be sent to juvenile institutions from 7 to 12, and about the championing of the Clean Slate Act -- a bill aimed at reducing the recidivism rate in Pennsylvania -- which has effectively passed through the House and Senate.

“There’s all of these ways that we’ve found to help,” Jenkins said. “If there’s one thing that we know how to do as athletes, it’s draw a lot of attention to whatever it is we’re doing. So we’re just here to really encourage you guys.

"We know that your job is not easy and you’re right on the front lines of this. So when you’re getting tired, you’re overworked, you’re running out of resources, time, please lean on your community ... lean on organizations like us to really help you push that to the next level because you have people who are advocating for you, who are behind you. Thank you, guys, for having us.”

A public defender called out from the back of the room: “Thank you for kneeling.”

Jenkins never has knelt in protest, but instead raised a fist during the playing of the anthem for parts of two seasons. But in this room, it was the progress that had been done, not the form of demonstration, that mattered.

Jenkins, defensive end Chris Long and safety Rodney McLeod were meeting with chief public defenders from across the country for a discussion about bail reform -- a major point of focus for the Players Coalition for 2018. Gathered together around a horseshoe table, the group brainstormed for close to two hours to identify potential solutions to the core issues and cultivate an action plan that would best utilize the players’ growing influence in the court of public opinion. 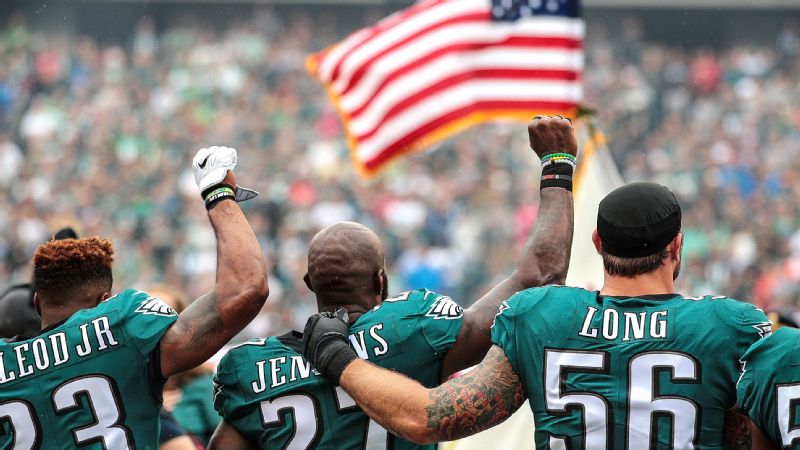 The Super Bowl champion Philadelphia Eagles did not make a scheduled visit to the White House this week, with President Trump canceling the event. A large group of Eagles players had decided earlier not to attend.

In order to have the proper messaging, they had to first get properly educated.

“This might be a dumb question,” Long said, “so prepare yourself.”

Transparency, the group of about 25 defenders concluded, is key in keeping the power brokers honest and protecting the vulnerable, so Long was curious about the capacity of courtrooms and how easy it is for the public to have access to bail hearings to help keep things on the up-and-up.

“I’m not the person to ask because our system currently is really messed up,” one defender responded. “Our bail hearings happen via video conference in a trailer while our current jail is being reconstructed. It is, for a lack of a better professional term, a s--- show right now.”

The latest actions of the Players Coalition unfolded in the shadows of a national controversy surrounding the Eagles and the White House. The Eagles were scheduled to visit Washington, D.C., on Tuesday to celebrate their Super Bowl championship, but President Donald Trump, who has been at odds with the NFL over player demonstrations during the national anthem, canceled the event after the team told the White House that just a small player contingent would be in attendance. Instead, Trump had a celebration of the American flag and emphasized the importance of proudly standing “for our glorious nation under God” before the playing of “God Bless America.”

About 75 media members descended on the Eagles’ practice facility Wednesday. Most set up shop at the locker stall of Jenkins, who chose not to use his voice at all in this moment, instead holding up signs that pointed to the work that players have been doing in the community and stats related to social-justice issues.

As it so happened, one of the events dedicated to those efforts was scheduled for that night.

“This is just an interesting coincidence, and it is an irony, because so many people that see players drawing attention to causes say, ‘Well, what are they doing?’ And the evidence is a Google search away,” Long said. “But the reality is I don’t think good news and productive stuff sells. We just have to get past this thing in our country where only the bad news and only controversy sells. This is good stuff. This is common-sense stuff. And it should be reported on that players are doing substantive things in their community and have been for a while.”

There were some jarring revelations in the session. A study found that 62 percent of the prison population in Philadelphia is made up of people in on cash bail, or as part of pre-trial detention. Those who can’t afford bail sit in jail for the lifespan of the case, which can be about six to eight months at the cost of $120 a day to taxpayers, all before it’s determined whether they’re innocent or guilty.

The New Orleans rep evoked an image from the immediate aftermath of Hurricane Katrina of evacuated inmates from Orleans Parish Prison, in orange jumpsuits, sitting on the overpass “for hours and days” in part because of the sheer number of people that needed to be rescued. There were more than 7,000 in the local jail at that time in large part because of the cash bail system and the lack of resources in the public defender sector. Improvements in those areas have helped lower the current number of prisoners to around 1,200.

In Washington, D.C., they eliminated cash bail and established a pre-trial services industry that protects presumption of innocence rights, with positive results. It is considered a model for other states.

“Watch a bail hearing and you will see immediately the ills of that process and how it does not match up with the ideals of this country and the presumption of innocence,” Long said, “and the fact that we are jailing so many innocent people and it is taking such a toll on not just those people and their families but our country and bogging down our system. And not only that, but it’s just wrong, and the assignment of bail is arbitrary. People would be blown away. But we have to connect people to that process. We are influencers who have that ability, and coming away from today, we feel like we’re more empowered.”