CHARLOTTE, N.C. -- The legend of rookie linebacker Devin White -- the Tampa Bay Buccaneers' fifth overall draft pick brought in specifically to help combat the likes of running backs Christian McCaffrey and Alvin Kamara -- began last week in Tampa not with a sack or an interception or double-digit tackles, but with a bad case of tonsillitis and a whole lot of prayers.

"I couldn't really speak," said White, whose job is to lead the huddle on defense. "You know, it was really hard having to call the plays. I mean, that's my job, but ... it was hard for me to breathe."

He couldn't eat and lost 10 pounds because it hurt so much to swallow. It also kept him up at night. He struggled to take in adequate fluids but practiced all week in a heat index of 110 degrees. He wound up needing five IV bags between Friday and Sunday because he was so dehydrated.

"I basically had a minor surgery on my tonsils. ... I had like an abscess coming in behind them so I had to get it drained -- it was full of pus. ... It took the world [to be able to play].”

White credited adrenaline and faith for getting him through it.

"My mind was made up that whether I was sick or not that I was still gonna play,” he said. "I knew it was gonna be tough, but I was gonna do it. Because that's what I signed up for.

"I pray every day. God makes no mistakes. He was just testing me."

He wound up with five tackles and an assist -- not stellar numbers, but remarkable given the circumstances.

"That's exactly what I would expect of the guy -- he's tough," Bucs coach Bruce Arians said.

"Nobody even knew what he had going on,” cornerback Vernon Hargreaves said. "He's tougher than me -- I'll say that."

Team captain and fellow inside linebacker Lavonte David added, "You wouldn't have known. He handled it well."

The next big step for White -- now that he's 100% and back to eating grilled cheese sandwiches -- is helping to stop McCaffrey and Cam Newton when the visiting Bucs face the Carolina Panthers on Thursday night. Arians specifically cited McCaffrey and Kamara as reasons Tampa drafted White.

"We have these backs in our division that he matches up pretty well with man-to-man and gives you something special," said Arians, who also emphasized that White won't be on McCaffrey the entire game. In space, for instance, Arians said they'd be more inclined to use safeties.

"My mind was made up that whether I was sick or not that I was still gonna play. ... Because that's what I signed up for." Devin White

White is also frequently deployed up the middle in defensive coordinator Todd Bowles' double- and triple-A gap blitzes -- aided by having two disruptive big bodies inside in Vita Vea and Ndamukong Suh -- and they use him off the edge.

"He's gonna be a good player really quick," said Ronde Barber, a former Buc and current Fox analyst. "I shook his hand after and was like, 'Is that guy 21 or 35?' He's mature. His influence will be greater than just the way he plays on the football field -- it'll be how he handles himself in the locker room. You can tell. That's what he is. He's a natural leader."

The Bucs brought White in to be a tone-setter, to help overhaul the culture of a defense that has been one of the league's worst for the past decade.

He has done it at every level he has played on so far.

With Shaun Houston's Cotton Valley (Louisiana) Swamp Dawgs youth team, White was so good as a 12-year-old running back, he scored 36 touchdowns one year despite never playing after halftime. At times, they played with a squad of only 10. 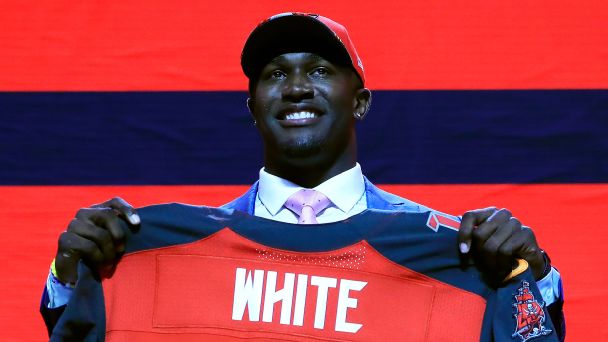 White has found a new home in Tampa, and the rookie linebacker has a hunch his late brother, a huge Bucs fan, might have had something to do with it. Story

"There’s a rule in a our league right now, called the 'Devin White Rule,' which is basically a weight rule -- you can't be over 145 pounds at 12 years old and run the football," Houston said. "That rule was put in our league the year after Devin left."

White chuckled. "I had to always weigh in and stuff. I couldn't run the ball no more. I had to show my birth certificate. ... We still kept winning. Nobody ever beat us."

LSU defensive coordinator Dave Aranda saw it in White in 2017 when he helped the Tigers fight back from a 20-0 halftime deficit to beat Auburn 27-23. White finished with a career-high 15 tackles, a sack and two tackles for loss.

"His mindset is to always go all-in ... whatever the circumstances," Aranda said. "His greatest strength, though, is that he can inspire people."

Even quarterback Jameis Winston, who was brought in to do the same on offense five years ago, says he sees it.

"The guy was born to play football," Winston said. "I see a confidence in him that you don't see in 11-year vets. ... He really has a deep passion for this game -- he loves it."