The holidays are approaching quickly, which means full immersion in conference play is right around the corner. All the nonconference résumé-boosting opportunities will be off the table, and the hype for March will continue to build.

This week may be a little bare due to finals week at many schools, but there's still a full complement of intriguing games to be featured on ESPN+.

On the slate for ESPN's streaming service is the national title contender Kansas Jayhawks playing in two matchups, an ACC school dueling an in-state opponent on the road and your weekly dose of a Dayton superstar.

In a season defined by a lack of dominant teams, Kansas has begun to emerge as a stable force. There was concern following its loss to Duke after the Jayhawks turned the ball over 28 times and struggled to consistently space the floor. 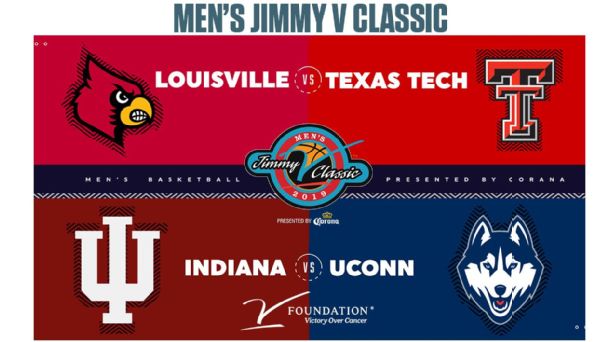 The games are part of V Week from Dec. 3-14. Donate to the V Foundation for Cancer Research.

Since then, KU has won the Maui Invitational and maintains one of the stronger résumés in the nation with wins over BYU, Dayton and Colorado. Bill Self has played David McCormack and Silvio De Sousa less and freshman Tristan Enaruna more, giving stars Devon Dotson and Udoka Azubuike more room to operate. The improvements certainly showed in the Maui title game as the duo combined for 50 of the team's 90 points.

While a chance to catch a national title contender is the top reason to watch this affair, Milwaukee has a fascinating talent to keep an eye on. Illinois transfer Te'Jon Lucas leads the Panthers in points and assists while averaging nearly two steals per game. Don't sleep on Lucas versus Dotson in an individual duel.

Sandwiched in between its second ACC game and a matchup versus a ranked Auburn team, NC State looks to avoid a trap on the road against UNC Greensboro.

The Spartans may have lost experience off last season's 28-win unit -- including leading scorer Francis Alonso -- but they maintain Isaiah Miller and James Dickey while keeping the strong defensive intensity that has helped establish the program as an elite mid-major. UNCG is allowing only 54.9 points per game, which is sixth in the nation and should keep it in the mix for the Southern Conference title.

This will be far from a cakewalk for the Wolfpack, but their depth -- six players averaging nine points or more -- and experience gives them an edge even in a true road game. How NC State's guards handle the pressure defense could be the difference between suffering an upset and earning a much-needed quality win.

This is a second chance to catch Kansas this week, as it hosts UMKC at the Sprint Center.

While we have already talked about the Jayhawks' improvements throughout the first month, we'll use this space to touch on the dominance of Azubuike. The senior center is averaging 14.8 points and 7.4 rebounds, including a 29-point effort vs. Dayton -- in which he looked unstoppable at times -- and a double-double in 29 minutes against BYU.

Could we see another monumental performance? The Kangaroos feature just one player over 6-foot-8 and are one of the worst rebounding teams in the country, so expect KU to feed the veteran early and often. If he feasts in the paint, the Jayhawks will be nearly unbeatable as they sit 9-0 when Azubuike posts a double-double in his four-year college career.

With a stifling defense allowing just 60.7 points per game, Drake has started the season 8-2 with wins over solid mid-majors like Northeastern and Murray State. But the Bulldogs have yet to face a team as talented as Dayton and a player as skilled as Obi Toppin.

Stream more than 1,500 men's college basketball games this season from more than 20 conferences, including the Big 12, American and Atlantic 10. Watch all season on ESPN+

Toppin captured the nation's attention after an impressive first month of the season in which he averaged 22.1 points, 8.6 rebounds and helped lead the Flyers to the Maui Invitational final. What makes the sophomore big so dangerous is his ability to handle the ball like a guard, shoot from the perimeter and operate on the block with his array of smooth post moves. Try double-teaming Toppin and that's when Jalen Crutcher and the other role players step up.

How Drake defends Dayton's offensive precision and the energy level of coach Anthony Grant's team coming off a critical matchup against Saint Mary's will likely decide the winner.

Two teams that were projected to finish atop their respective conferences in the preseason coaches' poll try to right the ship in a matchup at the Siegel Center.

We'll start with the MVC representative, Missouri State, which has played a brutal nonconference schedule consisting of Xavier, Miami (Fla.), Buffalo and LSU. The Bears have solid wins over Saint Joseph's and Murray State, but also lost their opener to Little Rock and have been playing without sophomore forward Jared Ridder.

On the flip side, VCU has also navigated its way through a difficult slate. The Rams defeated LSU at home but took their lumps at the Emerald Coast Classic when they fell to Purdue and Tennessee. Turnovers and inconsistency from their top players -- particularly Marcus Evans -- must be corrected if Mike Rhoades' team is going to hold off Dayton at the top of the Atlantic 10.

Stephen F. Austin pulled off the biggest upset of the past 15 years in men's college hoops when it went into the Cameron Indoor Center and stunned Duke at the buzzer.

What does coach Kyle Keller's team have in store for a follow-up? Well, the Lumberjacks are already 2-1 since the upset with their lone loss coming on the road to Alabama. They play incredibly hard and feature a talented scorer in Kevon Harris (18.3 PPG).

This program is not devoid of talent as it has produced Texas Tech starter TJ Holyfield and former collegiate standout Thomas Walkup among others. Stephen F. Austin has reached the NCAA tournament five times since 2009 and the round of 32 twice in that span. The Lumberjacks are not strangers to the bright lights, but if they want to continue their success at the start of this season, bouncing back against UL Monroe is a necessity.

A stingy MAC team with NCAA tournament hopes faces off against a superb scorer and a Hall of Fame coach's son.

Toledo -- which was selected to win the MAC West Division in the preseason coaches' poll -- nearly defeated Notre Dame in South Bend, Indiana, and sports an elite offense and improving defense led by Marreon Jackson and rebounding machine Willie Jackson.

While Detroit is trending in the other direction with a 1-7 record and a four-game losing streak, the Titans still have Antoine Davis and Brad Calipari, the son of Kentucky coach John Calipari. Davis is one of the top scorers in the country as he averages 23.8 points and has 30-plus in two outings so far this season. We didn't get to see much from Calipari at UK, but the senior guard is now playing nearly 23 minutes a night with the Titans.

Davidson just hasn't been right this season. After coming into the year as one of the favorites to win the A-10, the Wildcats have lost five games already including double-digit losses to Charlotte, Wake Forest and Temple.

Jon Axel Gudmundsson hasn't played like the defending conference Player of the Year, and while Kellan Grady has produced some monster performances, he hasn't received much help.

Can the Wildcats start to right the ship before league play begins? They'll have to take down Coppin State first in what might not be as easy of a matchup as it looks on paper. The Eagles have already spoiled two buy games -- against Loyola Chicago and East Carolina -- and faced a gantlet in November. The pressure is on as Davidson can ill afford to drop this one at home.

Furman was on the cusp of the bubble last season after defeating No. 8 Villanova and Loyola Chicago. The Paladins finished 25-7 and made the NIT behind Matt Rafferty and Jordan Lyons. While Rafferty graduated, Lyons is still around to lead this season's squad in scoring, with Clay Mounce and Noah Gurley emerging as secondary options.

With those three at the helm, the Paladins have played Alabama and Auburn close on the road while shooting the ball exceptionally well from the field. The Southern Conference features East Tennessee State and UNC Greensboro, but coach Bob Richey's unit should be on the short list of favorites to win the league.

Winthrop is no slouch either as the Eagles beat Saint Mary's on the road, and gave Duke all it could handle at Cameron. Their leading scorer, D.J. Burns, averages just under 12 points however; the roster has incredible offensive balance with eight players putting up six or more a given night. This is an underrated battle.

Buffalo was expected to be one of the better mid-majors in the country coming into the new campaign. Instead, it went out and lost at home to Dartmouth in the opener, creating doubt as to how it would replace CJ Massinburg and two other talented seniors.

While the Bulls haven't completely gotten back on course, wins over Harvard, Missouri State and William & Mary help, while playing UConn tough in the Charleston Classic is also a positive.

Where does coach Jim Whitesell's group stand before heading into MAC play? This is a perfect opportunity to find out as Jayvon Graves & Co. look to take down Army.