Two of the best pitchers in the world started on Monday. Not against each other, but I was intrigued to see how Blake Snell and Trevor Bauer would fare, with Snell the reigning American League Cy Young Award champ and Bauer one of the top contenders going after his throne.

As Snell could have said after his outing: Not today.

Against an Arizona Diamondbacks team that had just scored 27 runs over the weekend in Colorado and ranked fourth in the majors in runs per game, Snell took a perfect game into the sixth inning and finished with just one hit allowed and nine K's in six scoreless innings in a 12-1 victory for the Tampa Bay Rays.

My favorite pitch came with one out in the fifth inning, the perfect game still intact and a 3-2 count on Christian Walker. Do you go after him with a fastball or throw an off-speed pitch and risk ruining the perfect game with a walk? Snell threw a hook and Walker simply looked at it and walked back to the dugout.

A few of Snell's other pitches:

Bauer, meanwhile, who entered his game with a 4-1 record and 2.45 ERA, was facing a mediocre Chicago White Sox team at home. Before the game, he and Chicago's Tim Anderson had a fun Twitter exchange, with Anderson saying his career numbers were so bad against Bauer that he would flip his bat if he hit a home run off him. Bauer actually took that in good humor and told Anderson he would appreciate it if he would skip a day.

Anderson didn't get him, but Yoan Moncada did in the top of the first:

Yo diggity, Yo doubt. pic.twitter.com/UZK96vwplm

James McCann added another home run as the White Sox put up eight runs (seven earned) on Bauer in five innings, raising his ERA to 3.42. The Cleveland Indians lost 9-1.

Bauer's season has been a little all over the place as he has had two six-walk games (although he won both of those starts with a combined one run allowed). Batters are hitting just .201 off him, but he has now had two 10-hit games.

Snell, however, also had one blow-up game -- his previous start, allowing seven runs in three innings against the Kansas City Royals -- so his ERA is at 3.62, plus he had a stint on the injured list with a fractured toe. But I like his peripherals better than Bauer's:

For now, I still have it as Snell over Bauer. Unlike that other game of thrones, however, we have a lot more episodes to go in this one.

The Twins may have an ace: The Twins cruised in Toronto, steamrolling Marcus Stroman and the Blue Jays 8-0. The line for Twins starter Martin Perez: 7 IP, 2 H, 0 R, 2 BB, 9 SO, 102 pitches. He's now 5-0 with a 2.83 ERA and has spun back-to-back scoreless outings -- his previous start was eight innings against the Astros.

Side note: Perez was 2-7 with a 6.22 ERA last year for the Rangers. Among 173 pitchers with at least 80 innings, Perez ranked 171st in ERA. (The two below him were also Rangers. It was not a good season for Texas pitching.) He ranked next-to-last in strikeout rate. He ranked last in batting average allowed. Basically, he was about as bad as a pitcher with a significant amount of innings can be. 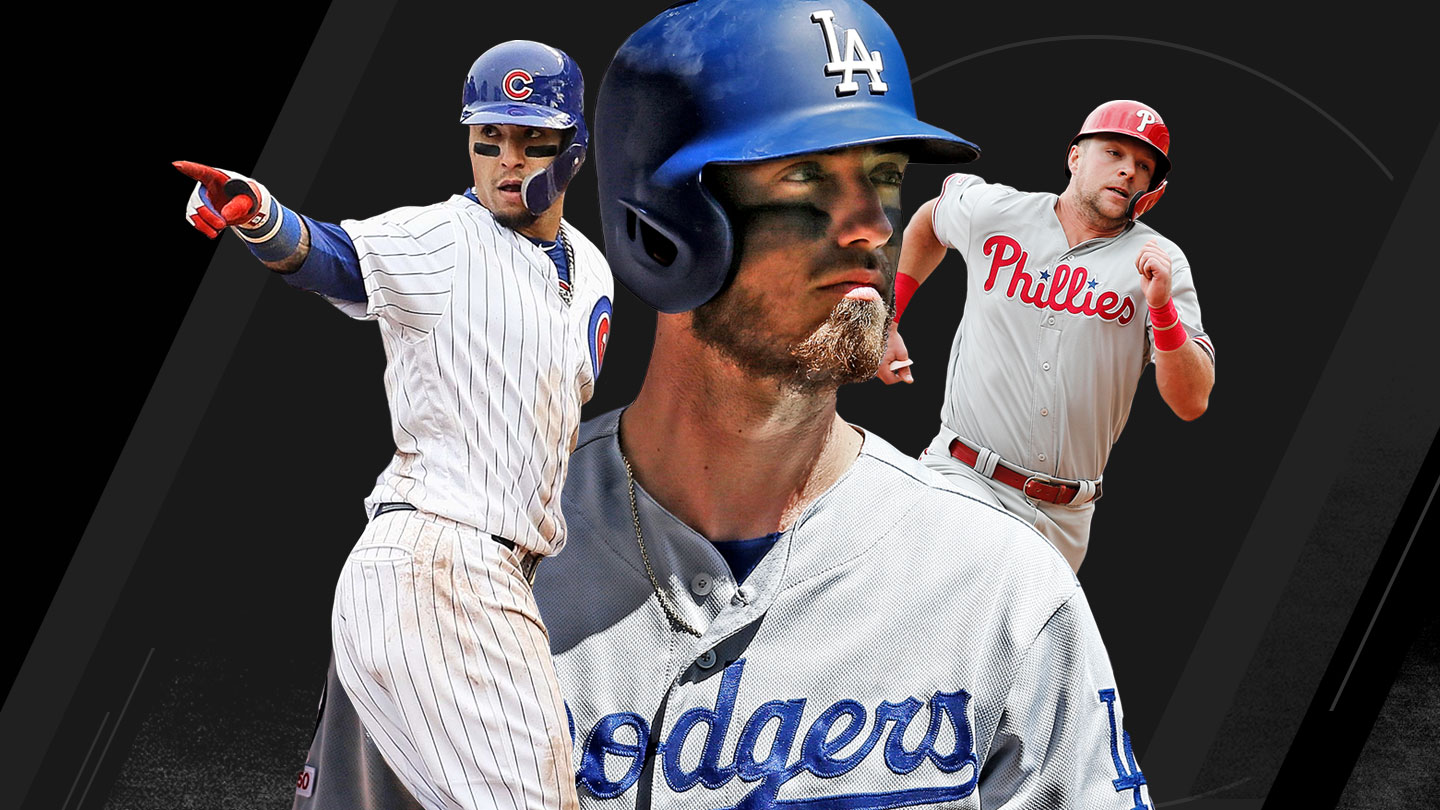 The NL powerhouses are making a strong move for the top, with the Cubs challenging the Dodgers for No. 1. Power Rankings

So what's the deal? A couple of things. First, he has ditched his slider for a cutter (something his agent had apparently been suggesting for some time). And he's throwing it a lot: 31.6 percent of the time so far. Against the Blue Jays, he threw the cutter 34 times and he'd used it even more in his previous two starts. Second, he worked with new Twins pitching coach Derek Johnson on using his hips more in his delivery and that has resulted in better fastball velocity (a big leap of about 2 mph).

"Before, I just used my arms," Perez said in spring training. "Now, I'm using all my body, and you guys can see the results. I don't miss inside anymore. ... Now, I just stay on the line and just throw the ball in front of my eyes."

Yes, it's only five starts, and four of those have been against the Orioles and Blue Jays. But in this case, there are clear and obvious reasons for the hot start. Perez is looking like one of the best free-agent signings of the offseason.

Vladimir Guerrero Jr. update: Since the Blue Jays got shut out, that means Vladdy Jr. is still looking for his first home run. He went 0-for-3 with two strikeouts and also made an error. (It could have been two, but one smash hit right to him was generously ruled a base hit.) He's now 5-for-33 in nine games, a .152/.243/.182 line. He also has fanned 10 times, a 27 percent strikeout rate. If this came from games 103 to 111, we wouldn't even notice, but it's a reminder that Vlad is a 20-year-old with little experience above Double-A.

Paddack outduels deGrom: It feels like I've written a note after every Chris Paddack start, but the Padres right-hander is so good, so fun to watch, with a masterful blend of movement and command and a lights-out changeup. In an anticipated showdown against Jacob deGrom, the rookie fanned 11 in 7⅔ scoreless innings in a 4-0 victory for the Padres. The Mets are suddenly scuffling at the plate, with just seven runs in their past six games.

Paddack threw his three fastest pitches of the season: 97.9, 97.9 and 97.2 mph, all to fellow rookie Pete Alonso. Two of those were strikeout fastballs. Paddack said before the game that he wanted Alonso -- "I'm coming for him," he said -- and he got him.

The Reds score lots of runs: Speaking of highly ranked prospect rookies, Nick Senzel homered twice for the Reds in a 12-4 victory over the Giants:

Reds batters tied the Major League record (set in 1893) for batters hit by a pitch in an inning with four in the 6th, two with the bases loaded. pic.twitter.com/7UmtwzsqFc

And THIS also happened:

That's a swarm of bees and it caused an 18-minute delay.

The Reds scored 37 runs in the four-game series and hit 15 home runs, but came away with just a split as they blew an eight-run lead on Friday. Anyway, with all this craziness going on, my thoughts turned to Joey Votto. He had two hits on Monday, but he's still struggling, hitting .226/.341/.365 with three home runs. His projected stats are 14 home runs and 157 strikeouts. Two seasons ago, Votto hit 36 home runs, struck out just 83 times (while drawing 134 walks) and missed by two points of winning his second MVP award. So as a big Votto fan, these 2019 numbers are a little depressing.

The Statcast data reveals what the eyes tell you: It's not a guy hitting into bad luck. He entered the day with an expected batting average of .204 based on the quality of contact. His swing-and-miss rate is up almost 10 percent from two years ago. His swing-and-miss rate against fastballs is up 7 percent. He's hitting more fly balls than ever, but they're not leaving the park. Votto has had slumps before, but this feels like something more than a slump, and based on the lack of power in 2018, it seems we won't see the "one of the best hitters in the game" version of Votto again. Getting older stinks.

Sabathia versus Pettitte: The Yankees beat the Mariners 7-3, jumping all over Felix Hernandez for seven runs and three home runs in the first three innings. CC Sabathia got the win, No. 248 in his long career, though he labored a bit with 99 pitches and three runs allowed over five innings. After crossing 3,000 career strikeouts in his previous outing, becoming the 17th pitcher to do so (all the others ahead of him are in the Hall of Fame except Roger Clemens and Curt Schilling), there has been a lot of talk about Sabathia as a future Hall of Famer.

The consensus opinion that I've seen and heard is a clear "yes," although Ken Rosenthal pointed out on MLB Network on Monday that voters need to be careful with Sabathia -- as with Jack Morris -- in that if you elect him, that could open the door for a lot of other similar candidates.

That's my take. Yes, 3,000 strikeouts and 250 wins are impressive accomplishments, plus he won a Cy Young Award. On the other hand, I think there's one obvious comparison why Sabathia shouldn't be viewed as a Hall of Fame lock:

It's hard to find two more similar pitchers, right down to the identical adjusted ERAs. Indeed, using the similarity scores at Baseball-Reference.com, Sabathia's No. 1 comp is Pettitte, and Pettitte's No. 1 comp is Sabathia.

Here's the thing, however: In his first year on the Hall of Fame ballot, Pettitte received just 9.9 percent of the vote. Yes, he admitted to briefly using HGH in 2002 while rehabbing an elbow injury, but he seems to have escaped the PED stigma and that doesn't seem like an issue for most voters.

The above stats don't even factor in Pettitte's postseason edge. He started 44 playoff games, the most ever, and went 19-11 with a 3.81 ERA. Sabathia has started 21 playoff games and gone 10-7 with a 4.31 ERA. Sabathia does have one significant advantage: In one sense, he has been viewed during his career as more like a potential Hall of Famer. That makes sense. In his six best seasons, he compiled 35.1 WAR (including a Cy Young Award and six seasons of 4.6 WAR or higher); in Pettitte's six best, he had 31.7 WAR (and just three seasons of 4.0 WAR or higher).

Still, it doesn't compute that Pettitte would be a nonfactor on the ballot while Sabathia is viewed as a lock. This could be a case of recency bias and a good example of why there is the five-year rule before a player appears on the ballot.