WHEN GAVIN EDELSON walks into Ms. Beever's first-grade classroom every morning, it's a safe bet he will be dressed in one of his Troutfits. That's what mom and dad call them. There's the white jersey and the red one and the gray one and the All-Star one and the one with Mike Trout's nickname on the back, which might be the coolest of all, because other 7-year-olds probably aren't big enough fans to know his nickname.

Come to think of it, Gavin knows a lot more about Trout. "Ask me," he said, and, well, OK. Where's Trout from?

When is his birthday?

He didn't wait for the next question.

"You want me to tell you what his wife's name is?" he said. "Jessica."

"I know everything," Gavin said. "Every night before bed, I read a Mike Trout book. And right now, I'm wearing a Trout shirt. My red one. Whenever I go to a fancy dinner, they make me wear a collared shirt. I just want to wear a Mike Trout shirt."

In his room, there are the bobbleheads, the figurines, the mess of baseball cards, all part of the small shrine to Mike Trout. It doesn't matter that Trout plays for the Los Angeles Angels and Gavin lives in suburban Baltimore. Every morning, Jason and Julie Edelson are awoken by their younger son barging in to turn on MLB Network to see how Trout fared the previous night. 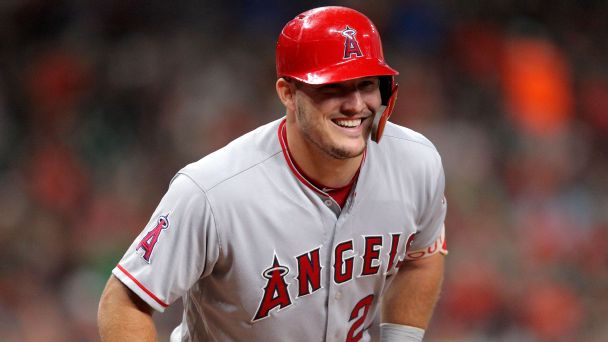 Mike Trout shares his thoughts on other elite players around the game and more.
Listen: BBTN podcast convo with Trout

As much as he adores those mornings, Gavin positively lives for the one series a year the Angels play in Baltimore. That starts Friday, at 7:05 p.m. local time, though for Gavin it will begin a bit earlier. He'll head to Camden Yards before the game, properly Troutfitted, and hope Friday is a lot like June 29, 2018.

"I remember it's the best day of my life," Gavin said. "Because I got to hang out with Mike Trout."

FROM THE FIRST moment Gavin Edelson saw Mike Trout, he felt a kinship. It was 2015. He was 3 years old. His older brother, Jake, always seemed to pull Trout cards out of packs, and for Jake's birthday, Jason and Julie took the family to see an Angels-Orioles game at Camden Yards. They sat in the fourth row on the visitor's side, right next to the on-deck circle. As Trout prepared for his at-bat, Gavin started to mimic Trout's every movement.

It was cute, his parents thought. Little did they realize what it would turn into. Gavin wanted to be like Trout. The next morning, he woke up and put on a red T-shirt, gray sweatpants and red socks. He then got a jersey and wore matching baseball pants and spent his days walking around and swinging like Trout, a perfect little simulacrum. By the time the Edelsons returned to Camden Yards for an Angels game two years later, Gavin came with a poster that read: MIKE TROUT'S #1 FAN.

Then the Angels returned in 2018. Jason secured passes to watch batting practice on the field. Ebel was the first person to emerge from the Angels' dugout. Jason asked whether he remembered Gavin. "Of course," Ebel said. They thanked him for everything he did in 2017. Ebel said he'd see what he could do this year.

"I remember it's the best day of my life, because I got to hang out with Mike Trout." Gavin Edelson describing the day he got to join Mike Trout on the field at Camden Yards

The Angels started stretching along the third-base line. Trout was stationed near Albert Pujols, Kole Calhoun and Luis Valbuena. Suddenly, he looked at Gavin and waved him over. Jason said to Julie: "Is he talking to us?" He pointed down at Gavin, then toward Trout, who nodded.

"I saw him, wearing my jersey, and I think it's everybody's dream to be messing around with big league players," Trout said in an interview last week. "I thought it was cool. I thought it was a great experience for him. He's going to live with that forever, and he's going to tell all his friends. Any chance you get to make a kid's day -- you don't know what they're going through. I didn't even know him before that. Just interaction with the guys, bringing him on the field, watching BP, I think it's special for him."

"Here you have by far the best player in baseball," said Jason, whose hands shook as he took video. "And he'll probably go down as the greatest ever. And he goes out of his way to do this for kids. It's not like he just pulled the kid out there to watch him play. He's having a conversation with the kid, laughing with him, actually talking to him."

After about 15 minutes, Gavin was comfortable enough to ask Trout if he could have his bat following batting practice. Sure, Trout said, and that bat is now the featured item in the shrine. Fully emboldened, Gavin asked Trout for one more thing before he returned to his parents: If Trout could hit a home run for him that night.

"I'll try," Mike Trout said, and then in the first inning, on the third pitch he saw, Trout deposited a David Hess fastball 408 feet into the center-field stands. Eventually, pictures of the meet-and-greet emerged after commissioner Rob Manfred at the All-Star Game questioned Trout's desire to market himself. ESPN's Eddie Matz tweeted a few photos and a video of Gavin and Trout, and they reminded that the best player in the word didn't have to acknowledge the kid, let alone spend time with him. He did, though, and it says far more about him than the greatest commercials possibly could.

"There's no better way to market Mike Trout," Jason said, "than to show what he did on that day."

AMELIA BEEVER ISN'T much of a baseball fan, but she has learned one thing about the sport during the 2018-19 school year.

"I know that Mike Trout is absolutely amazing," she said.

She knows this because in her role as Ms. Beever, first-grade teacher, she reads Gavin Edelson's schoolwork. And more often than not, if there is a writing assignment in Ms. Beever's class, Gavin will use the opportunity to wax poetic about Trout.

Ms. Beever adored the baseball cards Gavin gave out for Valentine's Day -- the ones with a picture of him and Trout, custom-made by Topps. The company originally rejected the card because it featured an active player, Jason said, but he called up the Major League Baseball Players Association, asked for permission to use the photo since MLB's official account had tweeted it and got the go-ahead.

Gavin would come to school and tell his friends about how he was playing shortstop against 8- and 9-year-olds, and how his swing really was like his friend Mike Trout's. Ms. Beever's shelves were thin on baseball books, so she picked up every one she saw and made sure to tell Gavin there was a new selection for him to try.

"He's very respectful, very hardworking, very helpful. He's a great friend," Beever said. "He really is a very sweet boy." She saw that earnestness not just in Gavin's actions but in his words. Last year, he wrote Trout a letter that he delivered to him on the field. This year, he put together a new one, affixed the Mike Trout and Gavin Edelson card to the top and is holding out hope that the rain scheduled to hit Baltimore during Friday's game goes in another direction. Because he really wants his hero to understand how he feels.