Former 2015 AL MVP Josh Donaldson cashed in as a free agent on a big bounce-back season with the Braves to reportedly get a four-year contract with the Minnesota Twins for at least four years and $92 million dollars. Regardless if he eventually earns a fifth year that could take the deal to $104 million, it's a huge move for a team that just crushed a record-setting 307 home runs during the regular season en route to earning its first American League Central title since 2010 and just the second 100-win season in franchise history.

Now that they're adding a man who just clubbed 37 home runs for Atlanta, we asked David Schoenfield, Dan Mullen and Christina Kahrl about the impact of the move in the standings, the postseason picture and for Donaldson's old team going forward.

Who is the AL Central favorite?

David Schoenfield: I get that the Twins' lineup is loaded, coming off a season in which they mashed a record 307 home runs -- and now they've added Donaldson, giving them six hitters who hit more than 30 home runs last year. It's going to be fun to watch them hit.

You know what though? It's going to be fun watching the Indians pitch. Assuming they don't trade Mike Clevinger and assuming they keep Francisco Lindor all season, I'll be picking Cleveland. Clevinger should be a trendy Cy Young Award pick -- at least in the non-Gerrit Cole category -- and I'm buying Aaron Civale with his high-spin fastball and high-spin curveball as the real deal, joining Shane Bieber and Carlos Carrasco as a strong front four. And the bullpen -- keep an eye on James Karinchak and hard-throwing Emmanuel Clase (acquired in the Corey Kluber trade) -- could be one of the toughest in the game.

Dan Mullen: While I'm definitely buying long-term stock in the White Sox, I'm not buying them being as good as some others seem to think for 2020. That means it's likely going to be a two-team race between the Indians and Twins with a very big difference-maker landing in Minnesota. Cleveland's pitching is better than Minnesota's pitching, but the Twins' lineup is now more than good enough to make up that difference.

Christina Kahrl: It's still the Twins. Remember, Rocco Baldelli did inspired work getting Twins pitching turned around last season -- they ranked fifth in xFIP as a staff, after all. Taken individually, adding old Homer Bailey and older Rich Hill might not sound amazing, and there's Michael Pineda's suspension to work around, but it's all about putting together enough competitive starts to fill out the six-month schedule, and the additions are upgrades.

The White Sox should be right there with them. I love what Dallas Keuchel and Gio Gonzalez could do to give them innings and winnable games, and their lineup finally has some extension in it, with Yasmani Grandal, Luis Robert and Edwin Encarnacion in the mix, and that should let them trade crooked numbers with Minnesota in either ballpark. The Indians don't have that, and they don't just need a lot of bounce-back seasons, they need Mike Clevinger's second-ever 30-start season and the Plutkos and Plesacs to come through on the mound. I don't think it adds up, and the odds of a Lindor trade in July just went up a few points.

Where does the Twins' offense now rank among MLB's best lineups?

Mullen: Bomba Squad 2.0 is loaded. I mean, Rocco Baldelli can now roll out this lineup:

Check in on the trades, free-agent signings and more, from now until pitchers and catchers report. MLB Offseason page »

That's a group that rewrote the franchise home run record books last winter with a 37-home run bat added to the middle of it. But this team is likely to regress in the long ball department if the baseball doesn't play like it did in 2019, and I'm still not ready to take this lineup over the Dodgers, Yankees or Astros.

Schoenfield: The Twins were second in runs to the Yankees a season ago (they scored four fewer runs), but considering park effects you might suggest the Twins had the best offense in the game. They have some obvious regression candidates, however, in Garver and Cruz and maybe even Donaldson, given his age. Still, I'd probably rank them third behind the Yankees and Dodgers and just ahead of the Astros.

Kahrl: The threat of regression from some of the older Twins is real, but I think we finally get to see Buxton and Sano both play 120-plus games in a season (a first for Sano, and a first if they do it at the same time for the Twins) and that makes up a big chunk of the difference. I'd still rate the Yankees and Dodgers lineups ahead of them and -- accepting that Yordan Alvarez keeps being a game-breaking monster -- probably the Astros as well. That just leaves the Twins better than every other lineup on the planet.

What should the Atlanta Braves do at third base now that Donaldson is gone?

Schoenfield: This is a huge loss for the Braves as the lineup suddenly looks rather pedestrian once you get past Ronald Acuna Jr., Ozzie Albies and Freddie Freeman. Who is their cleanup hitter? The Nick Markakis/Adam Duvall platoon? Austin Riley started out like Jerry Lee Lewis after his call-up, but pitchers quickly adapted to his aggressive approach and swing-and-miss issues. He deserves another shot to see what's there, but if I'm the Braves, I try to find another bat -- Kris Bryant is the obvious trade candidate and Atlanta has the prospects to get Nolan Arenado, but knowing the Braves' history, they won't pony up for either. Maybe Kyle Seager from the Mariners, with Seattle eating some of his remaining contract. 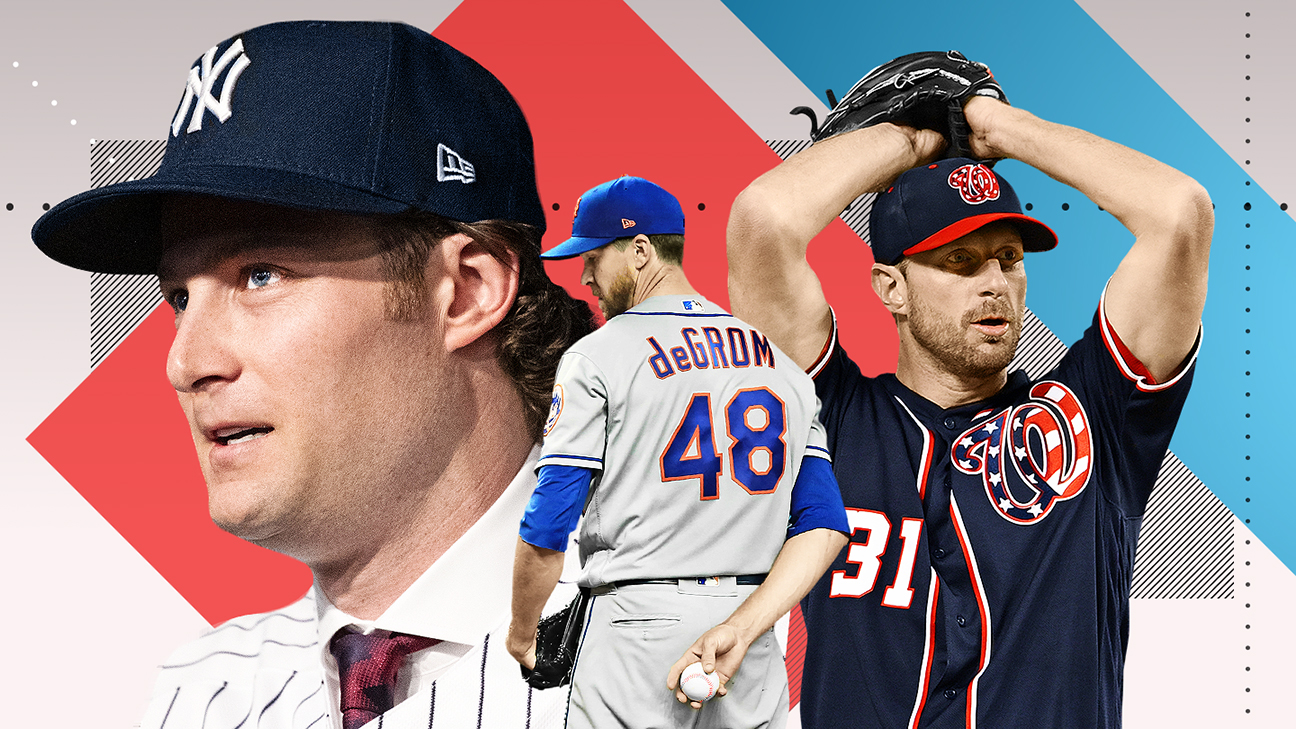 From a battle of Big Apple aces to a showdown of superstar shortstops and beyond, here are ESPN.com's rankings for each position ahead of the 2020 season. Buster Olney (ESPN+)

• Top 10 teams: The big boys have some competition (ESPN+)

Mullen: The free-agent market for third basemen is tapped. I really don't see the Braves giving up the prospects to land Kris Bryant or the prospects plus taking on the money to get Nolan Arenado. So the best play for Atlanta at third base just might be standing pat with what they have. But that doesn't mean Atlanta shouldn't make another move in an ultra-competitive NL East. How about adding Nicholas Castellanos or Marcell Ozuna to play an outfield corner and replace Donaldson's thump in the order while allowing Austin Riley and Johan Camargo to split time at third?

Kahrl: I buy the argument they need a right-handed hitter to replace Donaldson's production in the middle of the order. Trading for Kris Bryant would be the perfect fix for the next two years, but while they have the prospects to offer, the Cubs will ask for everything. Alex Anthopoulos has been ready to make the big deal before, but will the Braves' (usually cheap) owners let him do that here? Two alternatives? Shopping with Ender Inciarte and prospects, the Braves could check in with the Pirates to ask after Starling Marte, also under contract for two years and for just $23 million (though that leaves them still counting on Riley and Camargo at third). And if that doesn't work, dialing up the Royals to talk about Whit Merrifield makes sense; they could start him at third and in the outfield as a Zobrist-like everyday super-utility player.

Which team not named the Yankees is now the biggest threat to win the AL?

Schoenfield: I like pitching, and nobody has a deeper staff than the Rays. Trouble is, they might win 100 games and still finish 10 games behind the Yankees, so their odds of winning the AL is less than the AL Central or AL West winner. So it's probably still the Astros, who still have star-studded roster, and they reportedly haven't stolen any signs since 2018. Reportedly.

Mullen: Look, the AL Central race is going to be really fun in 2020. But if someone's going to take down the Yankees this year, I would put -- in order -- the Rays, the Astros and the A's ahead of the Central teams. Tampa Bay's pitching can make really good teams uncomfortable in October, the Astros are still loaded with talent and the A's could be really, really good with young arms like A.J. Puk and Jesus Luzardo set to boost the pitching staff.

Kahrl: The Astros are the easy pick to take the Yankees, but even before Houston got its dose of discipline from the commish I was thinking the A's could win the AL West in 2020 with a rotation already due to get a full season from a healthy Sean Manaea on top of Frankie Montas back from suspension and Luzardo and Puk ready to lend a hand. That's a lot of good pitching, backed by a strong offense and sturdy infield defense. They will not be a team you want to face in a short series in October.