THOUSAND OAKS, Calif. -- There have been no trade demands and no personal hype videos. Los Angeles Rams receivers haven't worn any flashy watches on game days and they have not broken out a choreographed dance in the end zone.

There's no glitz, little glam, just a lot of substance when it comes to the dynamic trio of Brandin Cooks, Robert Woods and Cooper Kupp.

Last season, they were each on pace for 1,000 yards receiving until Kupp's season-ending knee injury in Week 10. This season, as the Rams pursue a return trip to the Super Bowl, the trio is back and ready to leave their mark on the field -- and on the field, only.

"We really believe in that 'We Not Me,'" Cooks said, referring to Rams coach Sean McVay's favorite adage. "It's one of those things that we all know that if one person eats, the other one is going to eat naturally." 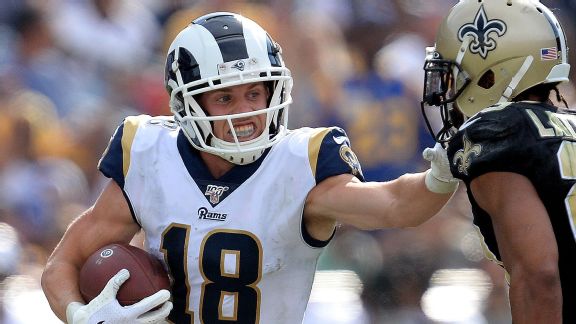 • Aaron Donald making his presence felt with or without sacks

With Odell Beckham Jr. and the Cleveland Browns on deck Sunday (8:20 p.m. ET, NBC) it's worth noting that Cooks, Woods and Kupp don't subscribe to the common notion that receivers in the NFL must come with a diva mentality. They don't squabble over targets and touchdowns and there has been no known demand placed on quarterback Jared Goff to feed one receiver over another.

"It's a very unique situation where all three of them are unselfish," Goff said. "I've never been on a team where it's like that."

Said Kupp: "Rarely when you label a group as something does that whole group really fall into that category. ... But you can label it whatever you want to. We know who we are and you got to let all that stuff go."

Cooks, Woods and Kupp sit together on the team charters -- OK, it's assigned seating, but they said they could choose to swap. They'd prefer to sit together. Cooks often stretches his legs, while Woods and Kupp watch movies. Occasionally, iPads come out to break down film.

On any given day at the practice facility, it's unlikely to see one receiver without the others. Their lockers are in a row, they sit in a row in meetings and at a table together at lunch. They stand together on the field and get hyped together when Cooks delivers huddle breakdowns in the weight room.

"It's just kind of that comradry we have," Kupp said.

It has carried onto the field.

In a 2-0 start, all three receivers have more than 100 receiving yards. It's quite the balance, considering the range of salaries and experience. Cooks is on a five-year, $81 million deal. Woods, largely considered underpaid for his production, is in the midst of a five-year, $34 million contract and Kupp, a third-round pick from Eastern Washington, remains on a rookie deal that pays him $3.8 million over four seasons.

Last Sunday, in a 27-9 win over the New Orleans Saints, their willingness to go to bat for each other was on display throughout a 66-yard catch-and-run by Kupp.

Cooks and Woods, with no ball in hand, sprinted down field to block for their shifty slot receiver, as he zig-zagged across the field and avoided five defenders before he was taken down inches short of the goal line.

"It's really just like just keep our guy up, keep him running as long as he can," Woods said. "Me and Brandin flying in, knock two guys out, got back up, keep blocking, got another one. Just racing trying to get in the end zone. But really, just describes this team as really selfless."

A week after he had eight catches on 13 targets in a win over the Carolina Panthers, Woods had only two catches on two targets against the Saints. After the game, the seventh-year pro posted to social media: "If you do it right, there's more to this position than just catching footballs. #WeNotMe"

A fourth-year pro, Goff is in his second season with the trio. He isn't forced to zero in on any target to ensure satisfaction and he doesn't feel a need to provide external motivation.

"They are all just extremely hard workers and understand a bigger goal," Goff said. "One guy goes for 150 [yards] and one guy has one catch and the one guy with one catch couldn't care. If we win the game, he doesn't care at all about the numbers."

NFL PrimeTime continues this postseason with extended highlights and analysis following the conclusion of each day's playoff games. Watch on ESPN+

When asked recently what he thought when he saw drama at the position elsewhere in the NFL, Goff deadpanned: "Where?"

"I do realize it is rare, very rare to have three guys that not only work that hard, but are of their talent level and are as selfless as they are," Goff said. "They want to block. They want to win and don't care about their numbers and they want to other person to succeed."

McVay said character is a priority when adding players to the roster.

"You want guys that are accountable and coachable," McVay said. "It sounds cliché the 'We Not Me,' but you want guys that want to be about the team and being a part of something bigger than yourself. Those are the kind of people that we identify."

(For the record: The Rams reportedly pursued a trade before the 2018 season that involved Beckham.)

But Woods is careful not to go too far when describing the receiving corps' mentality.

Below the radar? OK.

But low key? Absolutely not.

"We hope our game speaks for itself and be flashy in that aspect," Woods said. "But really just let our game do the talking, not necessarily the antics or celebrations, or anything extra, really just let our game, in between the whistles, in between the snaps, be a representation of how we play and how we are, which is fast, aggressive, physical, as a unit and as a team."