KANSAS CITY, Mo. -- Fate has finally favored the Kansas City Chiefs, who are AFC champions for the first time after beating the Tennessee Titans in the conference title game Sunday. The win allowed team chairman Clark Hunt to hoist the Lamar Hunt Trophy, named for his father, the late Chiefs founder.

That franchise first, coming 50 years after the Chiefs last played in the Super Bowl as champions of the old AFL, arrives at an interesting time in their history. It represents a remarkable turn of fortunes for a franchise that less than a decade ago was one of the most dreadful in the NFL.

That stretch also included one of the darkest moments in Chiefs history, when -- during their 2-14 season of 2012 -- linebacker Jovan Belcher killed his girlfriend and then drove to Arrowhead Stadium, where he killed himself in the parking lot of the team's practice facility.

Out of the ashes of that day and that season, the Chiefs have made a series of moves that led them to the Super Bowl. Without them, the franchise might still be stuck near the bottom of the league.

How did they do it? A chronological look at the five steps that turned the Chiefs around:

"When I began the search for our next head coach, I outlined a specific set of criteria that I believe best described the ideal candidate for our job. I knew that I wanted a proven leader who has built a successful program. I knew I was looking for an effective communicator, teacher and someone with a high football IQ and a strong work ethic. Finally, most importantly, I wanted a man of integrity, who would hold himself and those around him accountable to get the job done. What I didn't know when I laid out those criteria last week was that I was effectively describing Andy Reid." -- Clark Hunt, after hiring Reid, Jan. 7, 2013 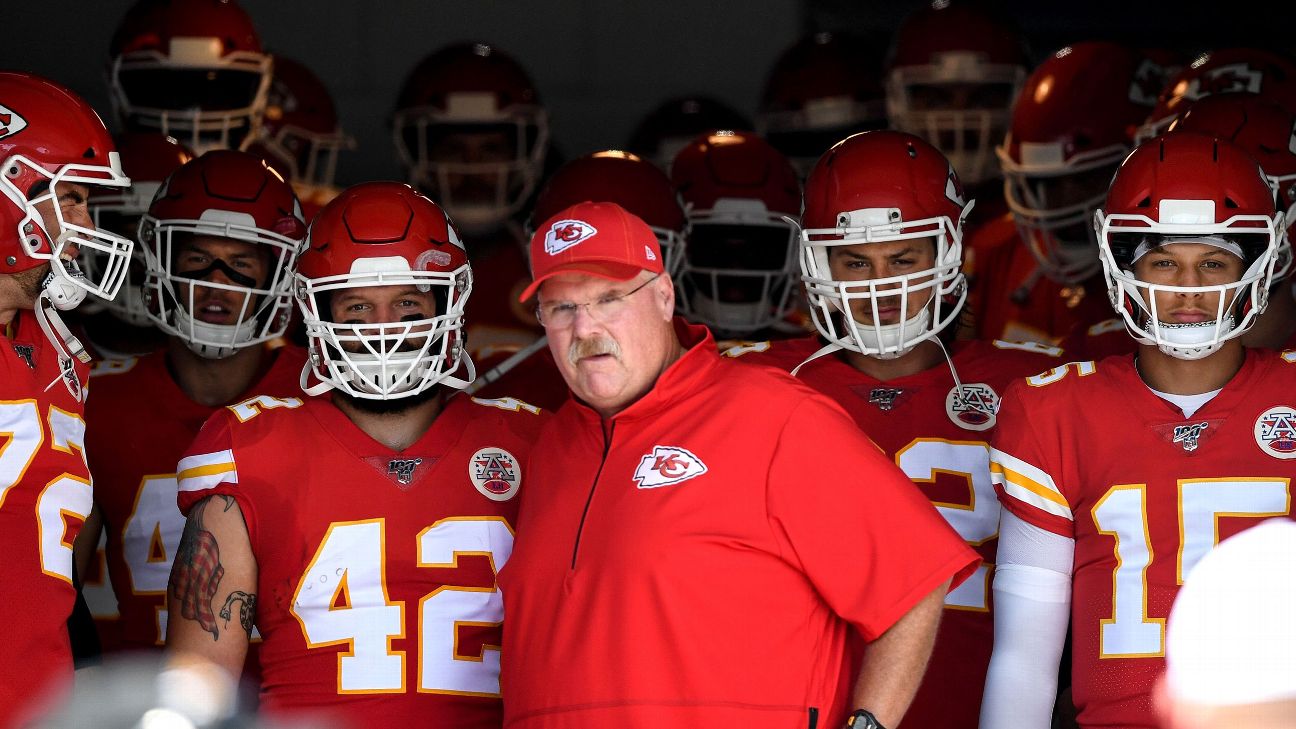 The Chiefs lacked any coherent sense of direction for years before hiring Reid, who immediately set the franchise on its upward course. He pushed the Chiefs to trade for quarterback Alex Smith and then brought immediate results on the field. He took the team that finished 2-14 the previous season and won his first nine games in 2013. That team wound up in the playoffs, the first of Reid's six postseason appearances in seven years with the Chiefs. The Chiefs have won a franchise-record four consecutive AFC West titles and reached the Super Bowl this season for the first time in 50 years.

Reid also brought a sense of professionalism to an organization that had long searched for it. He built a solid coaching staff and had a succession plan in place when the Chiefs lost offensive coordinators Doug Pederson in 2016 and Matt Nagy in 2018.

He could have fired defensive coordinator Bob Sutton a year earlier than he did, but Reid eventually made the right decision by bringing in Steve Spagnuolo for 2019.

"From a coaching standpoint, what a tremendous addition to a locker room, and obviously a fine football player, but even a better person. That's welcomed here, his leadership, and I think it's something that this team will benefit from and be able to build around." -- Reid, after the Chiefs traded for Smith, March 13, 2013

Monday through Friday, host Mina Kimes brings you an inside look at the most interesting stories at ESPN, as told by the top reporters and insiders on the planet. Listen

Smith was traded to Washington in 2018 and isn't around to participate in the Chiefs' first Super Bowl in 50 years. He won one playoff game as the starting quarterback for the Chiefs while losing four.

Still, it's difficult to overstate Smith's importance in turning the Chiefs from a joke of a franchise to a model for the rest of the league. He stabilized the quarterback spot, one that had been occupied in Kansas City in the years before his arrival by players such as Damon Huard, Brodie Croyle, Tyler Thigpen, Matt Cassel, Kyle Orton, Tyler Palko and Brady Quinn.

He led the way in changing the losing culture in the Chiefs' locker room. Smith took the Chiefs to the playoffs four times in five seasons, the last two as AFC West champions.

Perhaps his lasting legacy is the way he treated quarterback Patrick Mahomes, who was groomed from his arrival as a first-round pick in 2017 to eventually take Smith's job. Smith looked at Mahomes not as a rival but as a teammate. He helped Mahomes learn how to watch video, what to look for in opposing defenses, how to prepare every day as a starting quarterback, how to be a pro.

"I told Patrick that he could buy [Smith] a castle and it wouldn't pay for the experience that he was able to have working with Alex in his introduction into the National Football League," Reid said.

"We have to be patient with him. He's definitely not a finished product right now, but he has tremendous upside. We think he'll fit into this offense very well. He's a good person. He's intelligent. He's got great skill, and I just think he'll be a great Kansas City Chiefs player when it's all said and done." -- Reid, after the Chiefs drafted Mahomes, April 27, 2017 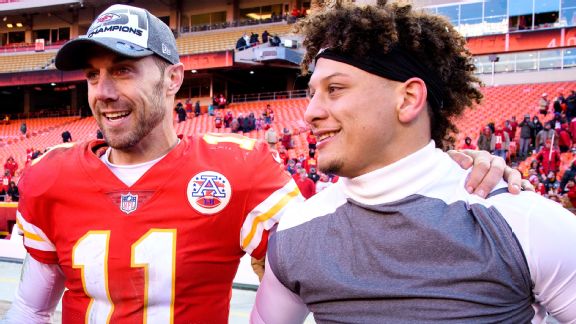 If this list were in order of importance, this item would be No. 1. Having Mahomes in their lineup gives the Chiefs a belief they can win any game and rally from any deficit. They erased a 24-0 deficit against the Houston Texans in the divisional round of this year's playoffs and two 10-point deficits against the Titans in the AFC Championship Game. Coaches and teammates all believe in their 24-year-old superstar.

Drafting Mahomes was a move that seems obvious now, but nobody saw it in 2017 as clearly as the Chiefs. They fell in love with him early in his career at Texas Tech because of his arm strength and accuracy and flair for playing quarterback like few others.

When he declared for the draft, the Chiefs held the 27th pick in the first round and knew they had to move up to get him. They read the draft perfectly, knowing they would have to get to the 10th spot, but no higher, to get into position ahead of certain other teams also interested in Mahomes.

The Chiefs packaged that 27th pick, a third-round choice in 2017 plus a first-round selection in 2018 to the Buffalo Bills for the 10th spot. It was the best trade in Chiefs history and might eventually become the best trade in NFL history as well.

"We've evaluated more than a dozen candidates from around the league and interviewed a number of outstanding personnel executives during this time. After going through the process, it was clear that Brett Veach was the right person to be the next general manager of the Chiefs. ... He has a sharp football mind, a tremendous work ethic and a keen eye for finding talent." -- Hunt, after promoting Veach from personnel director, July 24, 2017

Veach was 39 and had never been a general manager when he took over for John Dorsey in the summer of 2017. But he has made several bold moves since taking over, and many of them moved the Chiefs forward. In his first offseason, Veach traded Smith and cornerback Marcus Peters. He also signed free-agent wide receiver Sammy Watkins. His major acquisitions this year included the trade for defensive end Frank Clark and signing safety Tyrann Mathieu.

The talented but moody Peters was a problem for the coaches and would have been expensive to re-sign when his contract expired. Moving Smith was necessary to make way for Mahomes. Clark and Mathieu played major roles in improving a Chiefs defense that was so bad in 2018, it kept them from Super Bowl. Even the signing of Watkins, who has often taken a secondary role behind pass-catchers Tyreek Hill and Travis Kelce, paid off in the AFC Championship Game.

Veach has also shown a keen eye for undeveloped talent. He pulled Harrison Butker off the practice squad of the Carolina Panthers in 2017, and he has become one of the NFL's top kickers.

In 2018, Veach traded with the Dallas Cowboys for a little-known rookie cornerback. Charvarius Ward became a regular starter this year and a reliable player.

"It was a little ambitious and aggressive, but that's the mode we operate in. We have a great offense, and we want to take advantage of that every year and while they're all young and healthy and playing at a high level." -- Veach, on the many changes to the Chiefs' defense, July 2019

The Chiefs played solid defense in the earlier seasons under Reid, but things had changed in recent years and came to a head in last year's AFC Championship Game, when they couldn't make a key stop against Tom Brady and the New England Patriots. 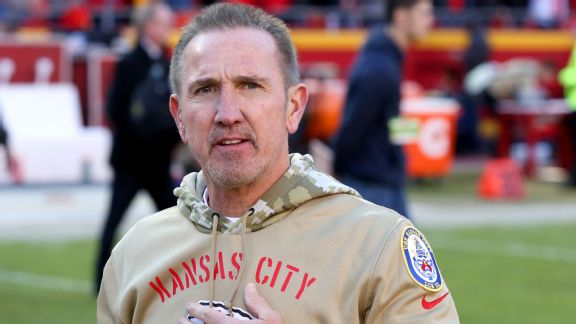 • 'How Tyrann Mathieu became the 'glue' of revamped Chiefs defense


• Stomach illness has Frank Clark shedding weight but not slowing down

Shortly afterward, the Chiefs began a defensive renovation on a grand scale. It's difficult to imagine the Chiefs being able to reasonably do more in one year.

They fired defensive coordinator Bob Sutton and reassigned or let go all of the other defensive assistant coaches. They released, traded or allowed to leave as free agents several longtime starters, including Eric Berry, Justin Houston, Dee Ford, Allen Bailey and Steven Nelson.

The Chiefs hired Steve Spagnuolo, a longtime assistant for Reid earlier in their careers with the Philadelphia Eagles, as Sutton's replacement. He hired a new staff and installed a 4-3 base system, replacing the 3-4.

They then signed safety Mathieu, traded for end Clark, drafted safety Juan Thornhill and brought in several other defensive regulars.

That's a lot of new for one year.

"I've been through this first-year thing a number of times," Spagnuolo said during training camp. "Sometimes it's gone really good, and sometimes it hasn't gone so good."

The Chiefs sputtered defensively in getting off to a 6-4 start. The Chiefs then won eight straight games, including two in the playoffs, with the defense carrying its fair share of the load.

To start the winning streak, the Chiefs made four fourth-quarter stops, including two interceptions, to preserve a seven-point win over the Los Angeles Chargers. Over the final six regular-season games, the Chiefs allowed less than 12 points per game, best in the NFL.